This is a hard one to miss when you visit Edinburgh, it in the middle of the city. Clear visibility from wherever you go. I think I have hundreds of images of this building, from all different angles. But let me tell you this, this is one beautiful monument and I completely understand the location of it but its not really photogenic. I have been there early morning, late night, in the middle of the day, with and without the sun. Nope, my friends, the monument is not really that photogenic. It's hard to get a good picture of it, and I know it, I have been trying my best.

If you are interested in seeing the monument up close and personal, its located in Princess Street garden, near Edinburgh Waverly Railway station. You can't miss it, it's just above 60 meters tall. 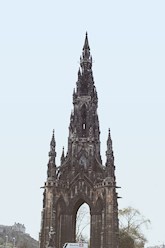 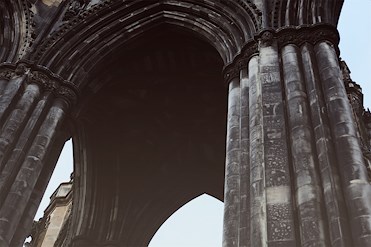 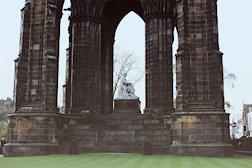 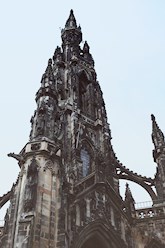 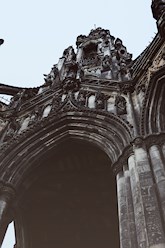 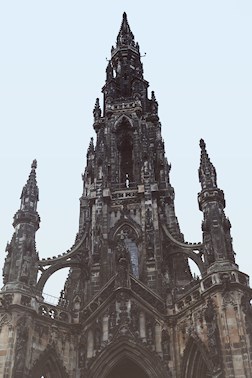 Some of all my attempts to get a good image of the Scott Monument in Edinburgh, Scotland.

You can enter the Scott monument if you want to climb the tower. It's divided into four levels with a total of 287 steps. It's a spiral staircase that gets narrower the higher you climb and the stairs can feel a bit unsteady at times, but it's perfectly safe. And the view from the top is nothing short of amazing, so its well worth the climb.
The price to enter is about 10 euros.

The monument is named after the author Sir Walter Scott. Doesn't ring a bell? He was a novelist, playwriter, historian and poet. Still no? Okay, if I say Lady of the Lake and Ivanhoe, then you know who he is right?

I'm going to have to climb this monument the next time I'm in Edinburgh. I like your pics of the details and the archways, but I see what you mean about it not being photogenic. It's like trying to take a picture of someone you love but they're scowling!
shouldbecruising.com

Haha agreed 😃
//Ann
nouw.com/anngelic
Had to do a double take as at first glance, the pictures do not betray a 287 step ascent. I am up for the challenge given the promise of a great view from the top. And you don’t give your images enough credit. The first is my favorite.

Thank you Lisa 😊
//Ann
nouw.com/anngelic
It's so disappointing when you see a great monument and you just can't get a good angle to take a photo and do the building justice. We had this scenario in Seville last year, the cathedral was impressive, but no matter where I took a photo from it just didn't look that impressive.
www.rovingjay.com

I know right?
I had this kind of trubble with the monument in Prague as well, but then again they are quite similar 😊
//Ann
nouw.com/anngelic
Such a beautiful building. Climbing the old spiral staircases up the towers are more work than one might realize!
HTTPS://HERLIFEADVENTURES.BLOG

Jag också, jag vill se mer av Skottland 😃
//Ann
nouw.com/anngelic
I have been to this place in Edinburgh and it is a photographer's delight! Climbing those 287 steps is definitely a challenge. Pictures of this place come out beautiful when the sun is not strong perhaps towards evening. Your first picture looks stunning! 😊
leisurelydrives.com

I had quite the hassel taking a picture that I wa pleased with, and that did not happend anywhere else in Edinburgh 😊
//Ann
nouw.com/anngelic
Oh you climbed so much with many efforts and then also this place can't be photographed well. Sometimes I have seen some places are very famous but we cannot take good photos of them. It is good you have alerted us, so that when we visit Edinburgh we will keep this in mind.

Hope you get to visit Edinburgh 😊
//Ann
nouw.com/anngelic
Incredible photos as usual, Ann! I had never heard about Scott's monument, I'm adding it to my Scogland bucket list 😊

Ah thank you 😊
//Ann
nouw.com/anngelic
Gonna have to climb the 287 steps when I am next in Edinburgh, perhapa not for the pictures but for the experience.
mytimelessfootsteps.com

I think you should Georgina, I am sure you would enjoy it 😊
//Ann
nouw.com/anngelic
This monument caught my attention when I was researching what to do in 1 day in Edinburgh. I must say you have managed to take some pretty cool shots. But I will save the 10 euros by not entering the monument as I can see this from outside.